During the summer of 2020, during his transition from fifth grade to middle school, Skyler Yun decided he wanted to do something to support his former elementary school, Glenwood Magnet Elementary School (GMES). He began a fundraising campaign on his own, to help make sure the school could be ready for in-person learning for students. For many days, he baked and sold Madeleine cookies, and he raised nearly $170. 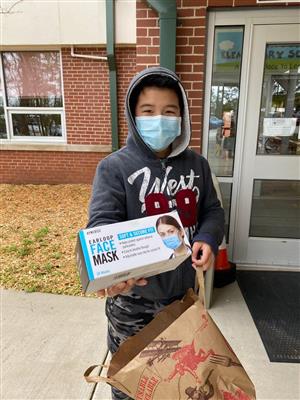 Madeleines, the famous French cookie, might not be as familiar as chocolate chip or oatmeal cookies, but the ones baked by Yun look perfect -- golden with barely browned edges. He learned to make them from a cooking camp he attended, and he made 17 batches of a dozen Madeleines, for a total of 204 cookies. Yun seems nonchalant about his accomplishments. “I wanted to help people during COVID, so I made a fundraiser to get money for masks.”

Yun’s mother, Helen Mu, said, “Using that money, Skyler bought five boxes of surgical masks. Little did we know that most of the 2021 school year would remain virtual.” But with the return to school buildings now, Mu said, “ I think these masks can be put to good use when a student loses a mask or anyone needs a new mask during the school day.”

On March 19, Yun and his mother met GMES Principal, Channing Bennett, outside the school to hand off the boxes of masks.

“It was great to reconnect with Skyler and to see how much he still cares for his former school,” Bennett said. “His contribution will provide supplemental PPE for any visitors to campus or staff members in need. As we say at Glenwood, ‘once a gator, always a gator!’”

Yun has missed his elementary school, and he said, “The favorite part of my Glenwood experience was all the friends I made and all the great teachers that taught me.”

Yun donated a portion of his fundraising money to the Phillips Middle School PTA, in order to support his new school as well.